The cerebral cortex, which underpins our perception, language and intellect, is the part of the brain that most distinguishes us from other species. Evolutionary expansion in size and complexity of the human cortex are likely to be an outcome of relatively small genetic differences affecting the mechanisms of cell proliferation, migration and phenotypic differentiation. However, the ways in which cortical development varies between species is not fully understood. In collaboration with a leading expert in mammalian brain development, Pasko Rakic of Yale University, we are interested to define the molecular and anatomical mechanisms that underpin differences in the development of the cerebral cortex by characterizing early neural stem cells in embryonic brains from relevant mammalian species, including humans. Within the cerebral wall, neural stem cells and other progenitors proliferate (including a population of early abventricular proliferating cells that we have recently identified) and their daughters progress to differentiated cell types. We will focus on the cascade of molecular and cellular events in the early cortical wall that initiate morphological, areal and functional diversity during corticoneurogenesis in the embryonic mouse, monkey and human telencephalon. Based on our preliminary evidence of the heterogeneity of neural stem cell composition, we hope to reveal the genes and transcription factors that are involved in generating species-specific differences. More specifically, we shall use high throughput microarray gene expression analysis of various neuronal stem cell types in these three species, as well as lineage analysis and histochemical and functional characterization. Various procedures, including cell transplantation, are being explored because cortical neurons in the human cortex are not normally replaced. At present, our knowledge of how to direct endogenous or transplanted neural stem cells to their desired position in the cortex to assume thea bility to form proper connections is still missing. Recent studies have revealed a surprising diversity of progenitor cell types in the VZ and SVZ, including neuroepithelial cells, radial glia, short neural precursors, and intermediate/basal progenitor cells. Accumulating evidence indicates that the timing of genesis, laminar specificity, and phenotypes of cortical neurons are encoded within lineages of individual progenitor cells in the VZ. This makes the proposed isolation and characterization of subclasses of human neuronal stem cells an essential step to assess the feasibility and/or use of transplantation to restore damaged or lost cortical neurons. 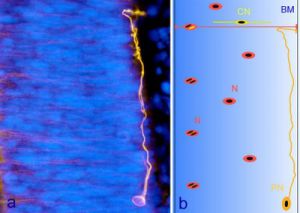 Analysis of early cortical development in human embryos with a battery of available and relevant cell class specific markers led to the discovery of "predecessor neurons" -- the first neurons of the human cerebral cortex (Fig. 1) and revealed potentially important differences between early human cortical lamination and connectivity and those of rodents (Bystron et al., Nature Neurosci., 2006; Bystron et al., Nature Rev Neurosci., 2008). Intriguingly, predecessor neurons have the opportunity to interact with neural stem cells in the cerebral wall (and the neural retina) via contacts in the pial surface. The nature and significance of these contacts is presently unknown. We intend to focus on the possible signalling interactions between predecessor neurons and stem cells.

Irina Bystron is a Senior Research Scientist in the Department of Physiology, Anatomy & Genetics, University of Oxford, and in the Department of Morphology, Institute of Experimental Medicine, St Petersburg. Bystron's major research interest is in human brain development and neural transplantation. Her work at Oxford on early development of the human forebrain began in 2001 with support from the Royal Society. In collaboration with C.B., Irina is studying the earliest stages of formation of the cerebral cortex in human embryos, examining the proliferation of neural stem cells, the production, migration and differentiation of cortical neurons, as well the formation of early connectivity. Irina was selected to receive a Pilot and Exploratory award from the Kavli Institute for Neuroscience and a grant from the Hill Foundation for her recent discovery of a neuronal population that precedes all other known types of neurons in the human forebrain. She is a member of the Advisory Board of DGEMap, a European programme for gene expression analysis in human development.